Once burned by a 90-day exercise window, this founder is extending it out to 10 years 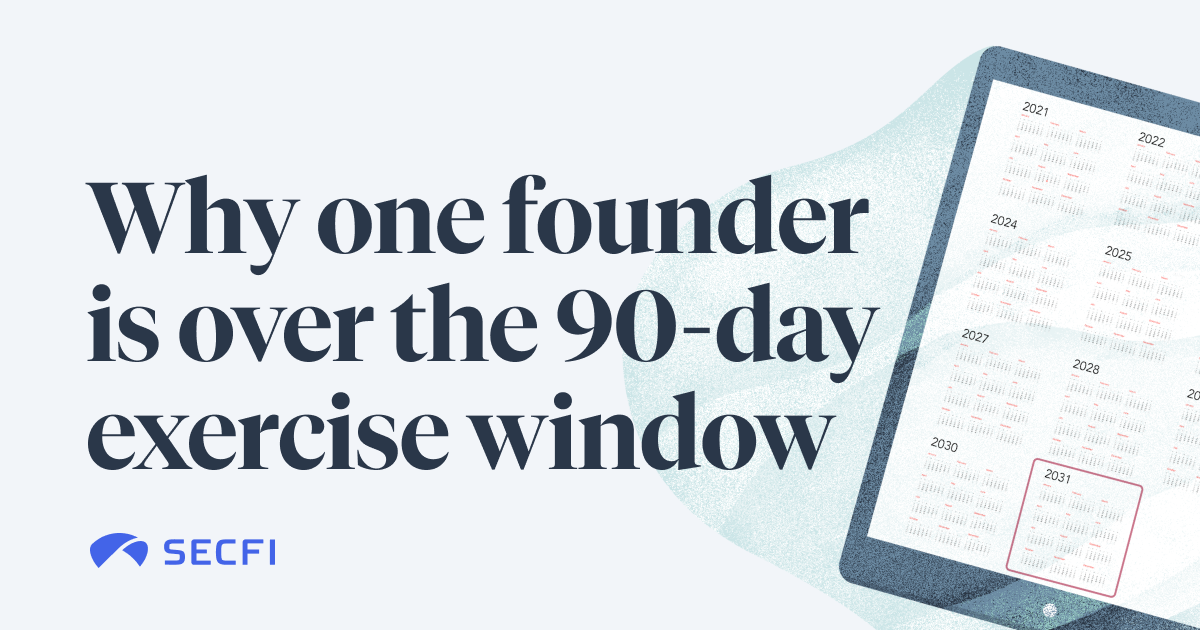 It was late 2016, and Ali Khajeh-Hosseini faced an all-too-common decision for startup employees: Should he exercise his stock options on his way out the door?

Four years earlier, he had launched a promising startup called ShopForCloud, which he sold to RightScale six months later for a combination of cash and incentive stock options (ISOs). He fully understood how his RightScale ISOs would work — he’d vest his stock options over four years, and would eventually unlock the ability to buy those options with cash.

But now, instead of buying those options, he was considering walking away and letting them expire. He and his cofounders were preparing to launch a new startup called AbarCloud, and they wanted to invest their personal money in getting the new company off the ground.

Like the majority of startups, RightScale offered its employees a 90-day exercise window — after the group left the company, they’d have just 3 months to buy their stock options, or lose them forever.

Khajeh-Hosseini ended up buying a small percentage of his RightScale stock options, and allowed the balance to expire. Two years after he made that decision, RightScale was acquired by Flexera.

If the company had offered Khajeh-Hosseini and his team a longer exercise window, they would have likely been able to experience the upside from that acquisition.

“It definitely feels like stock options are broken right now,” he said.

Startups ask their employees to take an initial gamble, he said — join us and (oftentimes) take a smaller annual salary in return for stock options, which might create life-altering upside in the future if we all work hard and grow the business together.

What’s less-discussed is the second gamble most startups ask employees to make when they’re leaving the company: Please mail us a check within the next 90 days for thousands — and in many cases, hundreds of thousands — of dollars to buy the stock options you’ve vested.

When it’s time to make that decision, the solution can be less than clear. An exit might be 8 or more years in the future, if the startup exits at all.

And others, like Khajeh-Hosseini, want to invest in their next company.

That extra time lowers risk for employees — they wouldn’t need to spend cash immediately, and could wait to see if their former employer raised additional rounds of funding and continued to grow. If the company went public or was acquired, the employees could still share in some of the upside they helped create through their earlier work.

But that requires a conscious choice from the startup’s leadership.

“The founders of companies have to make this decision, ‘Do we want to do this 10-year exercise window?’ and the tradeoff is more dilution for everyone, including the founders and all the later-stage employees who come on board,” Khajeh-Hosseini said. “But that’s the tradeoff we made at Infracost, because that’s how we would have wanted to be treated if we were employees joining this company right now.”

For tens of thousands of startup employees working for companies that continue to enforce a 90-day exercise window, Secfi can provide the non-recourse financing needed to buy those options instead of losing them entirely. Learn more about exercising your stock options with Secfi’s Options Exercise Tax Calculator.

Hope that was helpful
Ready for personalized equity insights?
Create your free account.

Secfi Advisory Limited and Secfi Limited (each, an "Adviser" and collectively, the "Advisers"), are wholly owned subsidiaries of Secfi, Inc. ("Secfi"), and are regulated by the Securities and Exchange Commission as exempt reporting advisers, providing non-discretionary investment advice to private funds. Specifically, each Adviser serves as a non-discretionary sub-adviser to certain pooled investment vehicles (each, a "Fund") managed by a third-party manager (the "Fund Manager"). Each Fund has been or will be formed by the Fund Manager for various purposes, including but not limited to, acquiring exposure to the stock ("Shares") of late-stage and growth-stage private technology companies ("Companies") held by the employees of such Companies who are seeking liquidity ("Shareholders"). The Advisers provide investment management services to the Funds on a non-discretionary basis solely with respect to the recommendation of certain Private Financing Contracts in order to facilitate each Fund’s desired exposure to the relevant Companies. Such advisory services performed by each Adviser are limited exclusively to recommending, arranging and negotiating Private Financing Contracts on behalf of each Fund. The Advisers do not have discretion to make investments on behalf of a Fund save for recommending Private Financing Contracts consistent with the general strategy and investment guidelines of a particular Fund. Accordingly, the Funds are the Advisers’ clients; Shareholders are not customers or clients of the Advisers. The Advisers do not provide any type of investment, securities, tax, or brokerage advice or services to the Shareholders in any capacity.

Nothing in this communication should be construed as an offer, solicitation of an offer, or advice to buy or sell securities. This is not a recommendation to buy, hold, or sell an investment or financial product, or take any action. Investing or transacting in private securities, including Private Financing Contracts, involve risk, including the possible loss of all principal. Private securities are highly speculative and less liquid than publicly traded securities. Investors should consider their investment objectives and risks carefully before transacting in private securities. All graphs, charts, case studies and illustrations are for educational and illustrative purposes only and are not necessarily indicative of future results.  They are based on the best available information at any given time but subject to change without notice.